There are 3 types of microorganisms in our microbial blends:​

Rather than think about what species are supplied by ACF-SR, instead, realize that ACF-SR is providing the full spectrum of Plant Growth Promoting Functions. With these functions supplied by ACF-SR, the growth and diversity and health of the bio-flora is optimized.

To ensure that ACF-SR provides the full spectrum of needed functions, we grow individual bacteria species on special nutrients and under special conditions, to ensure that Plant Growth Promoting (PGP) functions are present, without genetic engineering.

For example: Isolating and maintaining phosphorus solubilization in ACF bacteria is key to product efficacy:

In this scenario, we have tricalcium phosphate (insoluble) on the dish. We then put our bacillus subtilis species on the plate to ensure they are solubilizing the phosphorus into a useable form (orthophosphate).

The radius around the zones of clearing is directly proportional to P solubilizing capability.

The ongoing program of isolating based on P solubilization, regrowing, isolating, regrowing, maximizes, and ensures

Each species of bacteria goes through similar tests to ensure the functions are guaranteed before going into a bottle.

Below is a fingerprint of all the DIRECT functions built into ACF-SR:

ACF-SR and Other “Biological” Products

Using our innovative growth/brewing procedures, the full range of PGP traits are not only assured in all of our products, but a super high concentration and dosage can be applied at an affordable cost.

Other soil amendments, such as compost tea, digestate, or manure addition, simply add bacteria, but not necessarily the right bacteria needed for the specific PGP traits and performance.

Whenever bacteria or fungi are randomly grown in a rich nutrient mix (such as compost tea), the fastest-growing microbes dominate, and those are not likely to possess the required functions or traits.

Survival of the fastest: In order to survive in a complex mixed culture, bacteria must reproduce as quickly as possible. Slow growing bacteria are lost in the population compared to fast growing bacteria as depicted below:

While supplying the PGP functions, bacteria divert material and energy away from reproduction and towards the manufacturing of the PGP function. These helpful bacteria reproduce slower and are therefore lost in the population.

Our brewing process cultures and stabilizes high concentrations of each species. We know the guaranteed analysis and functions built-in after every brew.

There are a lot of conversations about the differences between fungi and bacterial based products. A balanced population of both are important pieces to the soil food web and overall soil health.

How fungi "eat" is called absorption. Fungi obtain their food by transporting it through their cell walls. Usually, fungi must live in their food if they are to eat. If the food is composed of simple molecules such as glucose or sucrose, soluble food can be immediately transported through their cell walls. However, most food that a fungus might consume is composed of complex, organic compounds, e.g., cellulose, lignin, pectin, starch, etc., which is insoluble. In order for this food to be utilized by the fungus, it must be broken down into simpler molecules that can be transported through their cell walls. The complex materials are broken down into absorbable food by “exoenzymes”.

Exoenzymes, made by both bacteria and fungi, are using valuable material and energy. These enzymes are secreted outside the cell, where they break down complex organics to produce absorbable food for the bacterium or fungi.

When does Fungi Create Enzymes?

Commercial enzyme production from fungi is common.  These are produced during high growth followed by some stress conditions. Exoenzymes are not manufactured during spore form. This often makes the survival of fungal products challenging.

When ACF-SR is applied, soluble nutrients for the germination of fungi increase. ACF-SR assists the growth of beneficial fungi.

Many fungi survive as spores in soil. In that form, they are not contributing much to plant health.

AdvancedAg bacterial species do not “take over” the biomass. They do not crowd out fungi. They assist the growth of ALL microbes. Then plant, fungal, and bacterial messaging can function better as the food sources are more available and can be utilized.

The entire biomass is enhanced due to more available nutrition. Signaling between plants, fungi and bacteria happens regardless, but with more nutrition and more diverse nutrition available, the signaling is more effective, and the natural biomass benefits.

ACF-SR has unique bio-formulas designed to improve the foliar and rhizosphere processes, which increase the capture of light and the conversion of the sugars to available plant energy. These bio formulas improve photosynthesis and uptake of carbon and mineral nutrients within the rhizosphere, resulting in the reduction of disease pressure that allows the plants to focus their energy on growth, reproduction, and yield, with fewer chemical inputs. The increased light absorption results in better conversion of CO2 and organic carbon into essential carbohydrates, improving the plant’s usage of energy in both foliar and rhizosphere, resulting in healthier, more vigorous growth.

ACF-SR makes amendments to the soil structure, allowing water to go deeper. The bacteria in ACF-SR help the roots grow deeper while creating more hair roots so they can absorb water from deeper soil. In general, the plant is healthier and able to uptake more nutrients as the bacteria help in transforming inorganic nutrients into organic, water-soluble forms, as well as improve nitrogen and phosphorous uptake. There are two additional mechanisms responsible for the enhanced drought resistance. The bacteria form biofilms that are hygroscopic and will help to retain water, much like super-absorbent polymers, which, in turn, help reduce evaporation and transpiration, conserving water. Also, the photosynthetic bacteria generate water.

The rhizosphere is the narrow region of soil around the root tip where plants encourage the growth of beneficial bacteria by the secretion of sugars and sloughing off of plant cells that feed them. Beneficial bacteria grow in the rhizosphere where they breakdown complex organics and provide auxins, hormones, and other nutrients that help the plant grow. Therefore, much of the nutrient cycling and disease suppression occurs in populations in the root zone. ​

Plants have a limited ability to genetically adapt to rapid environmental changes (heat, drought, toxins, or limited nutrients) and so they may use ACF microbes that do have this capacity to rapidly evolve due to their vastly shorter life cycles.  By having the right microbes for the conditions, the plants are healthier. This is similar to humans taking probiotics to improve their health

Some bacteria, notably the Bacilli, produce a protective spore in unfavorable growth conditions as a survival mechanism. Spores provide long-term survival during desiccation (for dry products) and protect the organism when formulated in unfavourable liquids. However, these spores require time to germinate (just like a seed) which delays their action during product usage.

While Bacillus spores are very effective at providing some compounds useful to plant growth, nitrogen and carbon fixation. When the spores germinate and become active, they are considered to be in the vegetative or "growing" form.

Many organisms are not capable of producing spores. They are always in the active form where they perform immediately upon application. However, it is much more difficult to maintain these strains in a stable formulation. ACF SR has a unique, stable formulation of vegetative strains with excellent shelf-life.

The cell protein of the bacteria-containing nitrogen is released slowly through mineralization. The benefits include

Plants obtain their Phosphorus (P) from the soil solution in the form of H2PO4(-) and HPO4(2-), or ionic forms of orthophosphate.

However, a large fraction of soluble inorganic phosphate applied as chemical fertilizer is immobilized rapidly and becomes unavailable to plants.

P solubilizing bacteria have been introduced to the agricultural community as phosphate bio-fertilizer.

"Bacillus and are among the most powerful phosphate solubilizers.”

Nitrifying bacteria also solubilize P, but only when free NH3 is present.

Bacillus subtilis and licheniformis in our formulas produce the hydrolytic enzymes needed to break down complex organic compounds. In this process, NH3 is released.

By liberating NH3 from organic compounds in the soil, Bacillus allows nitrifying bacteria to convert NH3 to NO3. This is what MUST occur for nitrifiers to help in solubilization.

The synergy between the various microbes in our formulas allows for optimal P solubilization, which is also extremely important in alkaline soils. 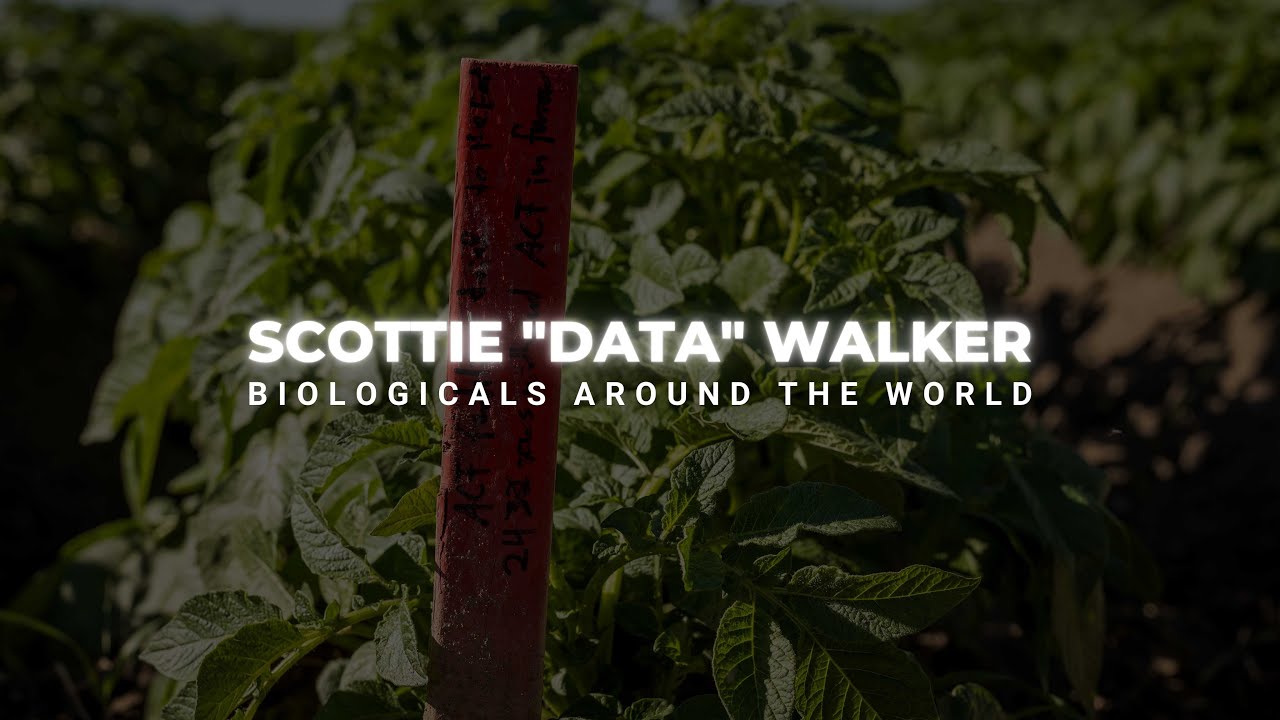 Biologicals Around The World 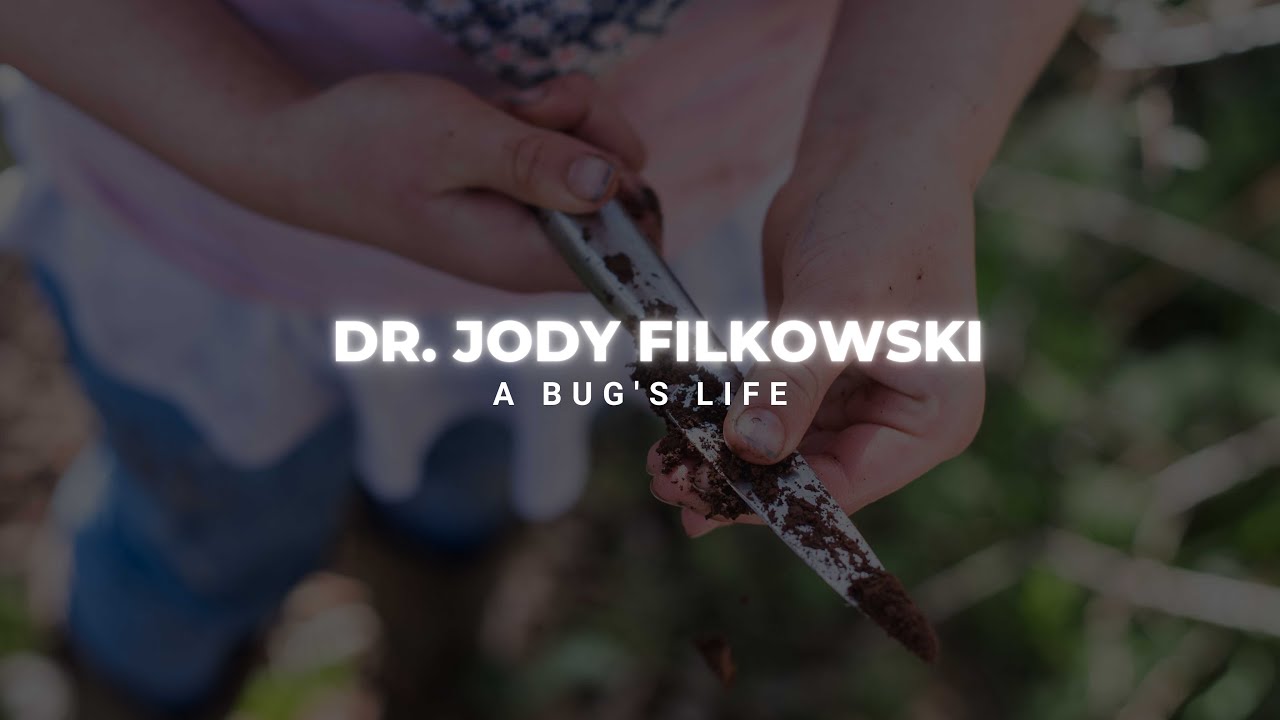 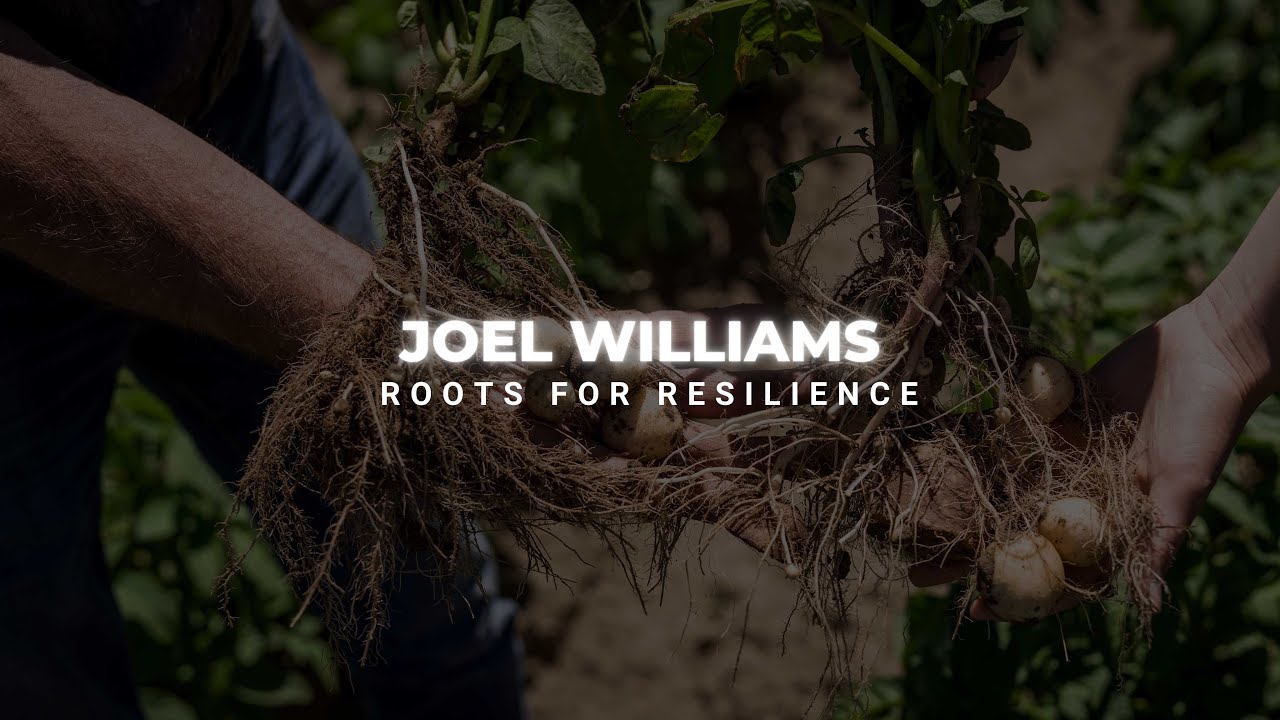 Roots for Resilience with Joel Williams 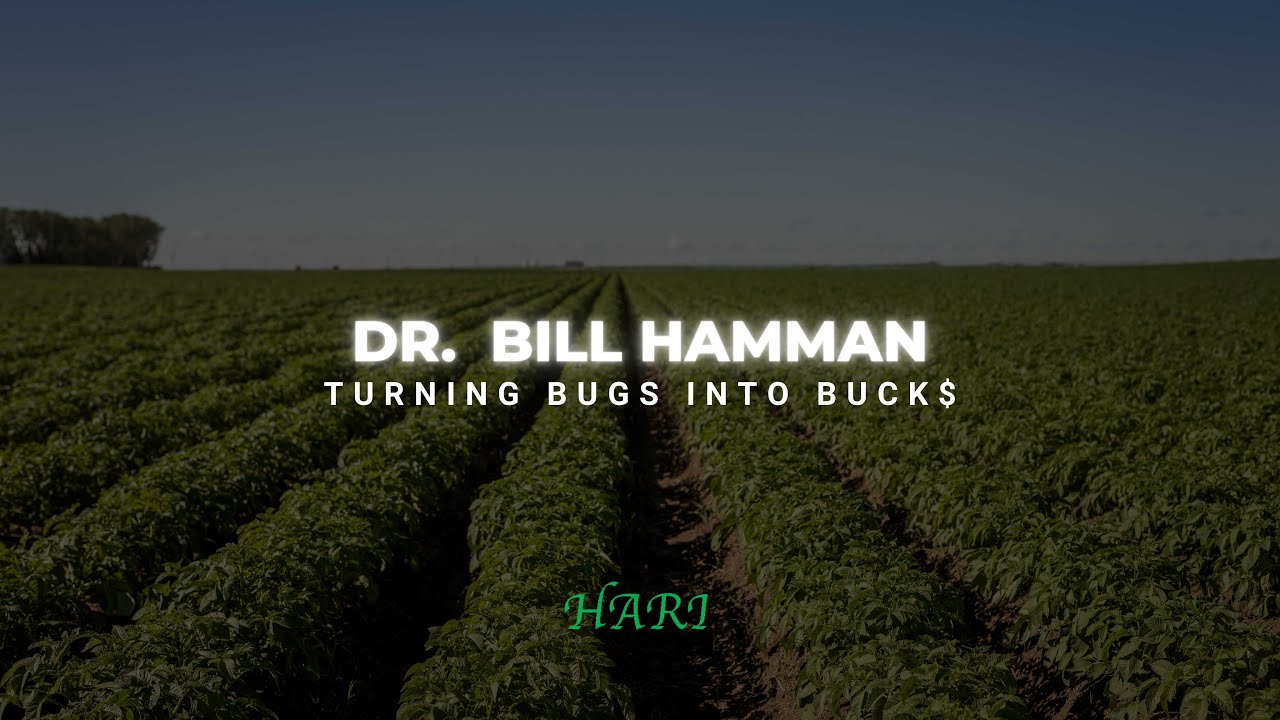 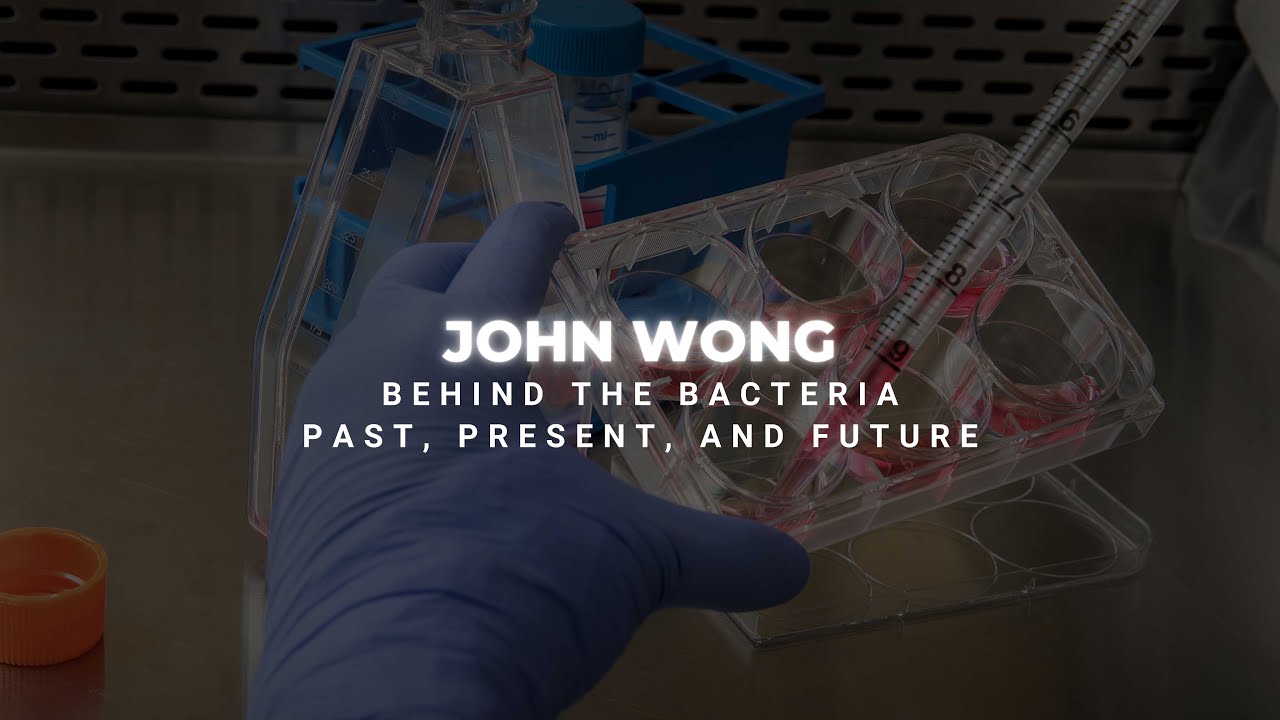 Behind the Bacteria with John Wong